Why Forecasting War is Hard

The following essay was contributed by Richard Hanania. Hanania is the President of the Center for the Study of Partisanship and Ideology and a Research Fellow at Defense Priorities. You can find his Public Figure page and his predictions here.

He argued that the Russian convoy north of Kiev was in deep trouble for tire-related reasons. I am not a tire expert. Is there truth to what he is saying? If so, can Russia fix the problem?

To be honest with you, I have no idea. In order to forecast the outcome in Ukraine, maybe I need to do the work of spending a day or so learning about tires since that’s going to be the determining factor in whether or not Kiev falls. Or maybe it’s a waste of time and what he’s saying isn’t even true or it’s true but not that important in the grand scheme of things. I have no way to decide.

Here’s another thread on the nature of globalization and why Russia can’t produce anything that is on the technological cutting edge from Kamil Galeev. The part on why mafias control relatively simple businesses instead of complex ones makes sense. But Galeev also has a theory about Russian elite behavior, claiming that complex scientific and technological industries empower nerds, and brutes like Putin, FSB types, and the guys who run the energy industry are too stupid to do those things themselves, and won’t let smarter people do them because they would then lose power to the nerds. For simple brutes, this seems like a pretty complicated and far sighted way to stay in control. And it strikes me as highly unlikely to be true, as authoritarian governments have shown themselves able to let industries grow without giving them political power. That was Putin’s deal with the oligarchs in the first place, so why can’t he do the same with the Russian version of Zuckerberg?

Does Galeev’s thread have any relevance to the ultimate outcome of the war? I know little about whether Russia can undertake a successful scheme of import-substitution. Galeev says they can’t, and he seems smart and sensible, but then he has a theory about Russian elite behavior that I think sounds sort of absurd. Maybe that means he’s biased, and I can discount whatever he says about the state of Russian industry. I’m not sure.

Now I think you can see why forecasting the outcome of a war is so difficult. My process in this conflict has involved looking at a lot of maps, reading a lot of articles and Twitter threads, seeing various arguments, and deciding “This looks right, this looks wrong, this looks probably true but not nearly as important as the author implies. This author seems credible but is saying crazy things, while this one seems crazy but is making sense.” I don’t have the time to look into every plausible theory of how the war will end or what the determining factor will be. Maybe it’s all about tires – or a thousand other things.

This is something of a problem with forecasting as a general matter. But although forecasting almost anything worth debating is difficult, war is probably in its own special category. The sample size of previous conflicts is large if you go back far enough, but the world changes, and it’s unclear how much guidance we can draw from past centuries. There are too many known unknowns and unknown unknowns. If you ask me to predict what’s going to happen in the next presidential election, I can take a few inputs like the outcome of recent elections, Biden’s approval rating, who the Republican nominee is likely to be, etc. and give you a pretty decent guess that will resemble what ends up happening in the real world. I think it’s most likely going to be a close election with Republicans winning, with my second guess being a close election that Democrats win. I can promise you that neither candidate is going to win 40 states. If you ask me what US GDP growth will be in 2023, without any economic training I’d say something like 3% since that’s what it is pretty much every year with a few exceptions. 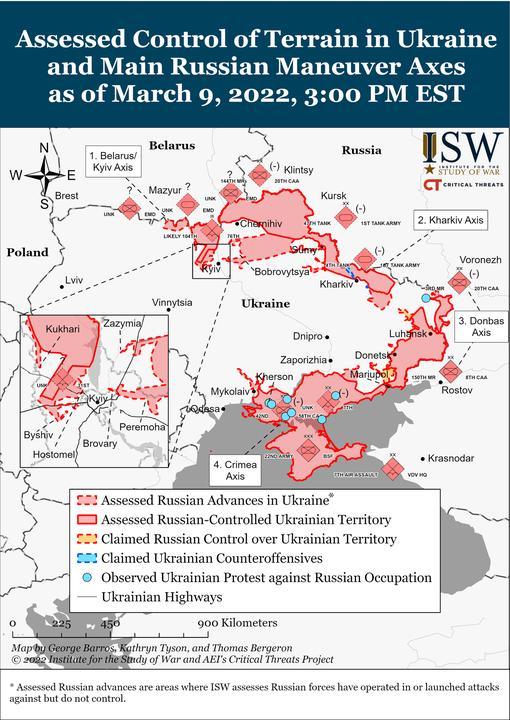 But when Putin invaded Ukraine, every possibility was on the table from “Ukraine collapses like the Afghan government did in August, Putin becomes the greatest conquerer in a century” to “Russian tires all get stuck in the mud, and it becomes an international laughingstock, sparking internal turmoil and the removal of Putin.” The result has been something in between those two extremes. And every war is similarly unpredictable, which is why even smart leaders can convince themselves to take radical gambles that seem insane in retrospect.

All of this means that I have low confidence in my predictions for how the war in Ukraine will turn out. Nonetheless, I don’t think my methodology is that bad compared to how other people are approaching the topic, and making clear how I’m thinking about it can therefore contribute to the public discourse. Moreover, if I’m going to make policy suggestions about what the US should do, it is useful to explain the empirical beliefs I am starting with and how I’ve arrived at them.

My method of forecasting generally involves seeking out a few big facts that others are ignoring or downplaying. Here are the ones that jump out at me regarding the eventual outcome in Ukraine.

Every forecaster must reduce a very complicated and messy reality to a few fundamental components, and here I think the keys are capabilities and resolve. Sanctions could in theory prevent Russia from being able to wage war, but I suspect that Moscow would prioritize the effort in Ukraine over anything else and find a way to keep the war going up until they achieve something that looks like victory. If North Korea can maintain a formidable army, I suspect that Russia can too no matter how bad sanctions get. Maybe Russian manufacturing is different because it’s just becoming isolated while North Korea has always been alone and had to rely on itself. Maybe the psychological factors at work are different, as North Koreans never had access to McDonalds and the Playstation Store and so they don’t miss them. This is possible, and unknown factors like these are why I give Ukraine any chance of victory at all. There’s nothing resembling a perfect historical analogy we can use to guide us, or even a very good one. But in the end, it seems to me that Russia only loses if it is forced to admit failure as it fundamentally rethinks what its core interests are – more precisely, what Putin considers important for his own survival, legitimacy, legacy, etc. – and I’ve already written about why that’s unlikely. I keep trying to play the scenario out in my head as to what a Russian loss looks like, and it’s hard to see it.

Based on the arguments above, I break down the likely outcome of the war in Ukraine in the following way.

I’m defining “victory” here in the sense that Russia is better off than when the war started regarding its key foreign policy aims. It either has more land or territory under its control than when the war started, gets international recognition for what it already controls, i.e. Crimea, changes the status of the Donbas, or gets a no-NATO pledge or some other guarantee of Ukrainian neutrality.

The most likely scenario here is Russia forces a settlement on Kiev that involves most of these components (35%), but it sticks to changes to Donbas and Crimea and exits the rest of Ukraine. There’s also a good possibility that Russia will grab even more territory in the eventual settlement, say the Black Sea coast and Kharkiv too (25%). It’s hard right now to see Ukraine or the West agreeing to any of this, but consider how unthinkable it would have been after 9/11 to believe that the US would let the Taliban ever rule Afghanistan again. Eventually, passions cool down and people accept military realities.

Annexation of Kiev or all of Ukraine still cannot be ruled out (10%). I checked with Anatoly, and he still thinks Putin is going for it all, arguing that this looks like a traditional European war so far where the challenge is destroying the conventional army, and then there is a very limited insurgency. He points to the lack of guerrilla war in areas that have been conquered so far, though obviously it’s very early. I think the maximalist scenario would impose massive costs on Russia, but it may well be willing to push forward, especially if there is no off-ramp for sanctions, and a big military victory serves as a way to psychologically compensate for international isolation and economic collapse. Note that all Russian victory predictions are compatible with Putin being overthrown in a palace coup since there’s no guarantee that whoever replaces him won’t be just as or even more committed to the war effort.

Russia continues to claim Crimea for itself and that Donetsk and Luhansk are de facto independent if not annexed by Russia, but Ukraine never agrees and otherwise maintains its independence. Eventually everyone just gets tired of fighting and tells a story as to why they won. This is the Korean War model, but the dividing lines will be less official, and there is no clear understanding of whether Ukraine will eventually join NATO or not. In the future, we perhaps see another war, or both sides end up so war weary they decide not to do anything that provokes or starts another conflict.

As in the case of Russian victory, I’m defining a Ukrainian victory as one where that country is in a better position regarding the main issues of the war – that is the Donbas, Crimea, and NATO. This is basically the scenario that Washington fantasizes about. It would take quite a catastrophic collapse in Russia for this to happen. Even if Putin falls over the course of the war, which I’d put at 10-20%, there is no Lenin waiting in the wings ready to give up wide swaths of territory at any cost in order to achieve peace. One reason US policy is so frustrating is that it seems to be putting a lot of stock in this outcome, and I think it’s unlikely. But again, war is extremely unpredictable, so I do have to give a Ukrainian victory something of a chance.

This would likely also end in Ukrainian victory if it stayed conventional. If it goes nuclear I hesitate to say much of anything about what might happen.

This is the way I’m currently thinking about the conflict, and am open to other approaches and arguments.

For my other Metaculus predictions, see here.

See also my previous article on earlier predictions from before the war started.