The world is hugely reliant on fossil fuels. Despite impressive progress in the development of renewable energy, still about 85% of the world’s energy comes from oil, gas, and coal.

The progress in recent years has meant that the worst-case climate outcomes are now unlikely. But we are still on course for around 3°C of warming above pre-industrial levels, according to climate models, unless our direction changes further.

Climate policy has a huge part to play in improving that situation, and agreements made at COP26 and other international forums can alter our course. But much of the most important change has been down to improvements in technology.

Those improvements have come much faster than anticipated. According to the International Energy Agency, about one gigawatt’s worth of new solar plants were built in 2000; in 2021, that figure was 145 gigawatts. But that rate of improvement was completely unforeseen. The IEA’s own predictions from 2005 (see below) suggest that by today, the world would be adding perhaps five or 10 gigawatts’ worth of new solar energy to the mix each year. Its more recent forecasts have been no more accurate: In 2015 it was predicted that the rate of expansion would start to drop by now. The exponential rise in new solar capacity has been genuinely startling, at least to energy analysts. 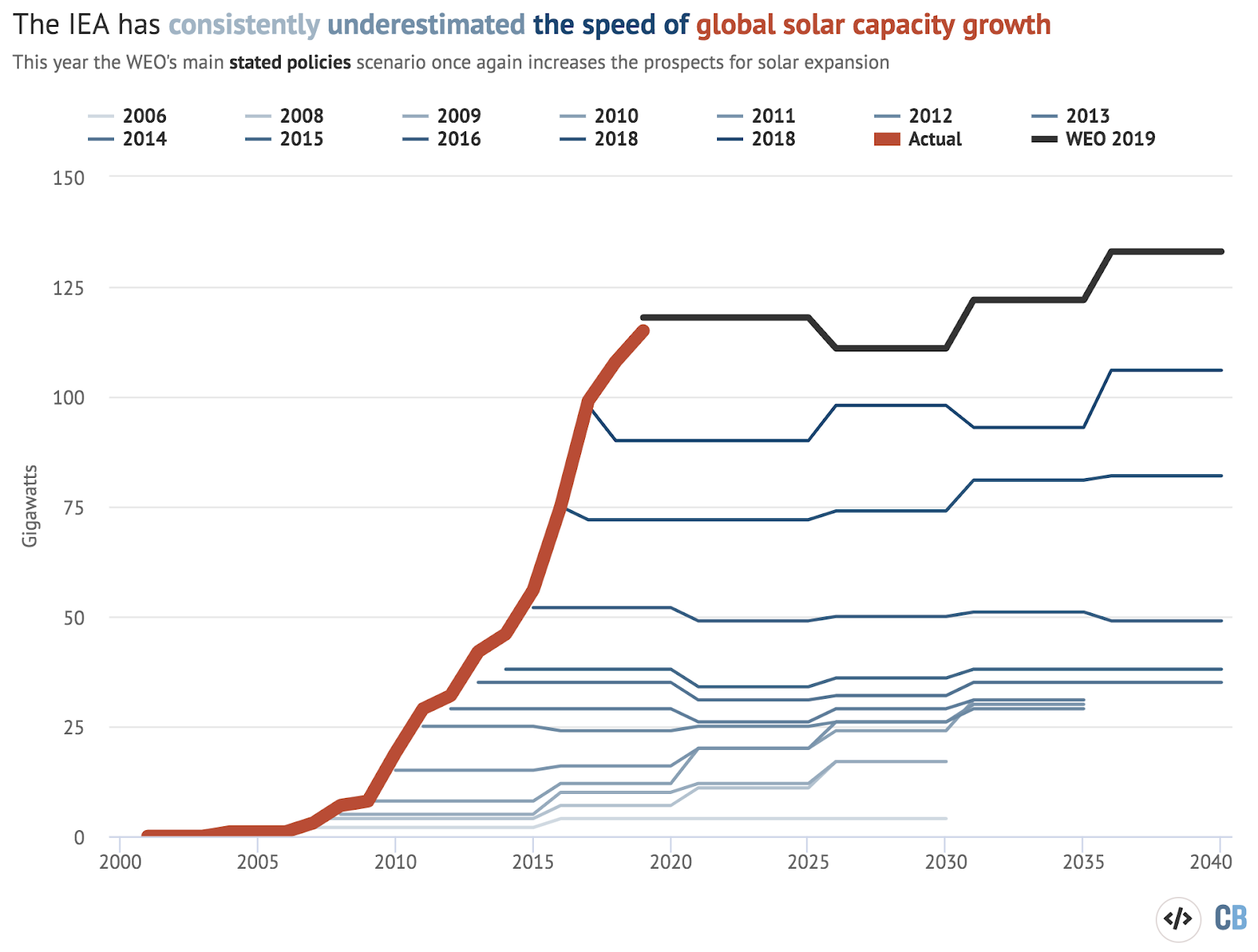 Annual net additions of solar capacity around the world, gigawatts. Historical data and an estimate for 2019 are shown in red while central outlooks from successive editions of the WEO are shown in shades of blue. The WEO 2019 STEPS is shown in black.

But perhaps it shouldn’t have been. Perhaps a well-calibrated forecaster should have looked at the exponential shape of the graph and drawn a line that continued to go up, rather than a series of leveled-off plateaus. And perhaps, more relevantly, a well-calibrated forecaster can make better predictions of the road ahead, not just with solar, but with the wider question of how quickly the world can wean itself off carbon-emitting power sources. Doing so is important: In order to understand how the climate will change, we need to know how our emissions profile will change, and that requires good forecasts of the energy mix.

A lot of attention has been paid to the cost of solar. That has been a huge driver of the increased takeup around the world, and of the failure to forecast that takeup accurately. As Quartz magazine reports, expert predictions (as collated in the International Review of Environmental and Resource Economics) have been astonishingly inaccurate even a few years ahead: Surveyed opinions of experts suggested that by 2020 the cost of solar would have dropped by around 10% from its 2014 level; the real number was more than 50%. That has, at least in part, driven the far faster than expected increase in solar energy use.

But Jenny Chase, head of solar analysis at Bloomberg, says that price is no longer the main obstacle to uptake, because solar—and wind—are now cheaper than any alternative. Bloomberg’s 2021 Levelized Cost of Electricity report says that for the countries that make up two-thirds of the world’s population—and produce 77% of the world’s GDP and 91% of electricity—solar and onshore wind are “now the cheapest source of new bulk power generation”.

If the cost continues to drop, then that will make it cheaper for countries to build more renewable generation capacity, but as it stands it is already cost-effective for any new capacity to be solar or wind anyway. (Prices may go up slightly this year, as supply chain issues raise the cost of components, although that will affect other energy industries as well.) The reasons to build other, more polluting, forms of electricity production are primarily not about cost.

The main concern for renewable energy is the intermittency of supply. Fossil fuels, for all their disadvantages, are predictable—you can shovel coal into a furnace at the rate you want, assuming you have a ready supply—and they’re easily stored: A lump of coal or a barrel of oil will keep indefinitely.

But the sun does not shine at night (Citation Needed). It also shines less in the winter. The wind blows unpredictably. The timing of humanity’s energy needs do not correlate with when the sun and wind are available to meet them. And storing the electrical energy gleaned is difficult. At some point, in order for the low-carbon revolution to continue, these problems will need to be solved.

There are various proposed methods. Building more efficient batteries is part of it, and Bloomberg notes that the cost of batteries per stored megawatt-hour of energy has fallen at a rate comparable to that of solar. But batteries are best at storing energy for a few hours, rather than for the months that would solve the problem of seasonal intermittency. The same is true of another widely touted method of storing energy, gravity storage, which normally involves using the electricity from your renewable source to pump water uphill. When the energy is needed, the water is let go and is used to run a water-wheel generator. It would be difficult to store the vast quantities of energy required to power, for instance, a city over winter using those methods: They are best suited to being cycled every day or even twice a day.

Some sort of chemical storage would be preferable. At this stage, says Chase, hydrogen is probably the most promising avenue: It is easy, using electricity gathered from renewables, to split water into hydrogen and oxygen, and to store the hydrogen. It’s not ideal, because hydrogen is such a small molecule that it easily escapes, and because it has an unfortunate tendency to explode. Experiments into “artificial photosynthesis” to produce more complex molecules, such as ammonia, are making headway. A method of producing long hydrocarbons like petrol using renewable sources would be ideal, says Chase, but that sort of procedure is a long way off.

An alternative is to integrate several energy grids together. It’s very possible that the wind will not blow much this year in Britain, or that we will have a more overcast summer than usual. But it is less likely that that will be true over the whole of Europe, or the whole of Eurasia and Africa. An energy grid that can take surplus energy from those places with lots of wind and sun at any given moment, and take it to the places with less, would be less prone to intermittency problems. Links from colder, higher-latitude countries to warmer ones that get more winter sun would smooth out seasonal inconsistency as well.

Another obvious way of reducing intermittency is to avoid relying solely on renewables. Nuclear energy has, if anything, the opposite problem to solar and wind—it is too consistent. It is difficult and inefficient to reduce the output of a nuclear reactor. They can provide a baseline level of electrical energy which can be topped up with solar and wind when necessary and available.

The difficulty is that contemporary nuclear power stations take years to build and cost billions of dollars. There are growing plans for “small modular reactors” which could be built at smaller scale and for much less money, but so far they are unproven. Whether countries will want to bet heavily on large, costly contemporary-technology plants is unclear, but given a desire to reduce reliance on fossil fuels in the coming decades, it may make sense to build them now rather than rely on a continued growth in renewable technologies.

So far we’ve been talking about electricity generation. But a lot of energy use is non-electrical in form: notably, in heating and in industry.

Manufacturing requires enormous amounts of heat energy, as does—obviously—heating homes and offices. This can be generated with electrical energy, but it is less efficient and less straightforward than doing so by burning fossil fuels.

The speed at which zero-carbon energy sources can replace fossil fuels in those sectors depends on several factors. One of them is whether electrical energy can be converted efficiently into more usable forms of energy storage, such as hydrocarbons through artificial photosynthesis. Another factor is whether innovative other methods can be used. In Switzerland, Chase points out, the coolant water from nuclear power stations is pumped around homes, providing district heating, thus reducing the need for heating from gas boilers.

Transport is another area in which fossil fuels are widely used, but the technology to move to a fully electrical transport system is “done”, in Chase’s words. It is highly likely that petrol-driven motor vehicles will phase out naturally over the coming decade or so. That said, the technology to do so for air travel is at an earlier stage, and the life cycle of an airliner is much longer than that of a family car.

There is a limit to how far the renewable energy revolution can go without significant new technological changes, as discussed above. However, it’s not clear that we’re near that limit. Several countries have reached very high levels of renewable energy production. In 2020, 43% of the electricity on Germany’s public grid was produced by renewable sources. That is despite Germany’s situation being far from ideal for renewable energy: It is not a sunny country, it has relatively little coastline for tidal power, and it lacks predictable winds. The UK is at about 40%. Whatever the ceiling for renewable energy production is, it is greater than 40% of electricity use. At the moment, electricity use makes up a bit more than 50% of total energy use in those countries, but as transport becomes more electrified, that figure will go up.

And most countries are nowhere near that level. As of 2019, hydro, wind, and solar energy made up less than 10% of the world’s total energy mix, and the rest of the world is much less electrified than rich Western countries like the UK and Germany. Still, for most of them, just as in the West, new solar and wind energy is cheaper than new fossil fuel plants. India, China, and many south-east Asian countries are moving toward renewable sources for new power stations according to Chase, simply because it is economical to do so.

The problems for forecasters

The focus on the cost of solar, and on the amount of new solar added each year, has the huge advantage that it is simple. A line on a graph goes down, or up, and can be easily extended into the future. Forecasters often failed to do so, and assumed that it would level out, but it seems that in principle it could have been predicted.

But the trouble is that the future of zero-carbon energy is rapidly becoming unconnected from those simple graphs. It now relies on many, much messier, things—the production of new technologies for energy storage; the integration of national grids by inter-state power lines; the development of small-scale nuclear power. And those things themselves are reliant on complex human factors such as politics. Will, for instance, countries be unwilling to integrate energy grids with sunnier, but more politically unstable, nations? After all, an advantage of reducing the reliance on fossil fuels is that it also reduces the reliance on unstable dictatorships in the Middle East.

So future forecasting will be harder than it was in the past. But it is still important, for investors and for governments. When will the world wean itself off fossil fuels?