You have been invited to co-author this question draft.

The author will submit it for review by Community Moderators when it's ready. Thanks for helping!

Core PCE and Max Unemployment in 2023

In a Tweet on October 27, 2022, Jason Furman, Harvard professor and former chairman of Barack Obama's Council of Economic Advisors, defined a soft landing as inflation below 3% (using the core personal consumption expenditures (PCE) price index) in the second half of 2023 and a peak unemployment rate in 2023 below 4.5%. The image below is his illustration of the potential outcomes and his categorization of these outcomes. 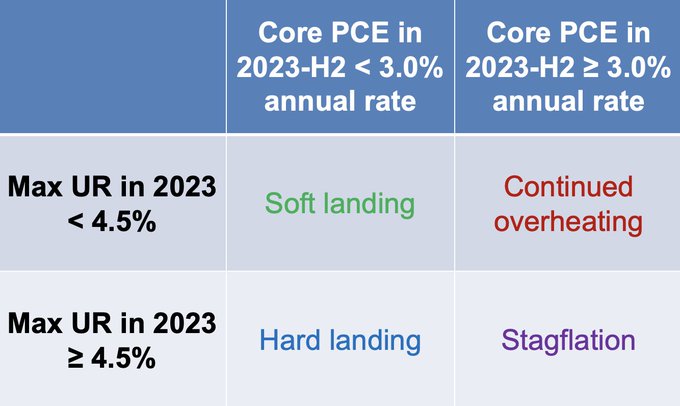 What will the core PCE and the max unemployment rate be at the end of 2023?

The symbol ≥ indicates the value is greater than or equal to the indicated value. Values will be taken as the rounded values shown on the charts used as the resolution sources linked above.

Note: this question resolved before its original close time. All of your predictions came after the resolution, so you did not gain (or lose) any points for it.

Note: this question resolved before its original close time. You earned points up until the question resolution, but not afterwards.

Current points depend on your prediction, the community's prediction, and the result. Your total earned points are averaged over the lifetime of the question, so predict early to get as many points as possible! See the FAQ.